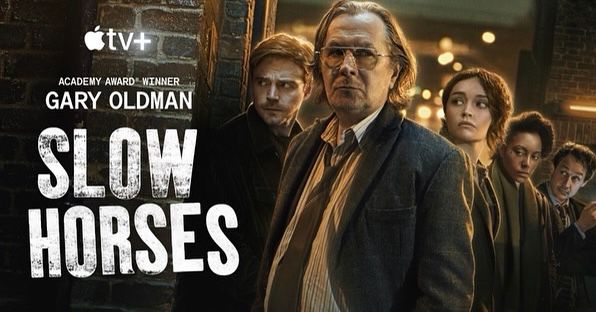 Slow Horses is a new spy thriller television series based on the novel of the same name by Mick Herron. The series is currently airing on Apple TV, and stars Gary Oldman, Jack Lowden and Kristin Scott Thomas.
​
​The title takes its name from a team of ex-MI5 misfits who’ve all messed-up, and now find themselves in an isolated department known as Slough House. This is their chance to prove themselves – and make amends.
​
​Filming for the series took place in a variety of FilmFixer locations across London. A number of street locations across Southwark and Lambeth were used with Elephant Road in Elephant and Castle, featuring in a scene where a parked car is hotwired and then driven away.  Southwark Park facilitated the large-scale unit base for scenes shot at the Shard and elsewhere in the borough.
​
​Across in the London Borough of Lee Valley, Walthamstow Marshes feature. East India Dock Basin was used as a unit base.

​
​Up in north London, the borough of Islington’s Caledonian Estate was used for filming sequences shot from multiple balconies, and a crane was used on-site on the estate to facilitate the process. Generous donations were made to the Caledonian Estate Residents Association. Handa Walk in the same borough made clever use of one of the estate’s underground car parks which doubled-up as a bunker-style HQ. A fake glass wall was built to enhance the scene, and the footways above ground were used for lighting rigs to illuminate the subterranean set.

​
​Still in Islington, the production team used Domingo Street (night shoot), St John’s Street, and Goswell Road (for a driving scene). Cars were filmed pulling up inside Bunhill Cemetery, City Road and Tabernacle Street also featured too.
​
​FilmFixer helped the Location department secure permission to film in many locations. One that proved difficult to arrange was Rheidol Terrace near Upper St. It’s a small corner cafe where a stakeout takes place. The location worked because of the two big plate glass windows, (and all the reflections), looking onto a busy junction in the rain. Though this made continuity and traffic control rather difficult, all the interior and exterior scenes looked wonderful.