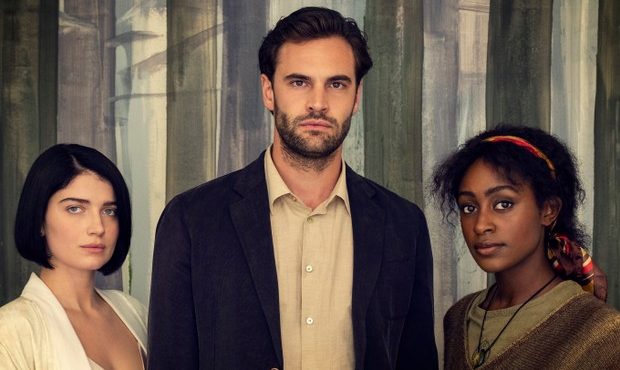 Upcoming Netflix thriller Behind Her Eyes (pictured above) has been the standout production in Islington recently, not least for giving FilmFixer new entrant Alice Wintersteiger valuable experience on set.

Alice recently decided to discontinue a degree in Physics & Philosophy and move back to London to pursue a career in film. She took part in the Bloomberg Broadcast Programme run by the Roundhouse Trust and was put in touch with us by the staff there. Thanks to the efforts of our Training & Development Manager Sue Russo, we secured marshaling roles for Alice on Behind Her Eyes at King Square Gardens and Ironmonger Row Baths.

(Sheltering from the rain whilst filming at King Square Gardens)

Overall, the series filmed in a grand total of 15 Islington locations. They made generous donations to the Peel Centre, Catherine Griffiths & Clerkenwell Community TRA, and Aubert Court TRA, and their shoots ranged from simple street-filming to unit basing and large scale shoots.

Luckily, we managed to place Alice on two of the most interesting, complex shoots. Each one involved a total cast & crew of around fifty people. The Ironmonger Row Baths shoot in particular featured a number of unique set dressing elements and lighting alterations. It’s the sort of experience that is invaluable for industry entrants who are willing to get stuck in; offering a fast track understanding of how the different departments work and who’s who on a large working set.

(Alice having a ball on set)

Catching up with Alice last week, she told us that “working on Locations has given me insight into the industry and made me some useful contacts. Everyone was really nice at showing me the ropes and explaining anything I was unsure of allowing me to feel confident and comfortable on a professional set.”

Even more excitingly, the experience gained has helped Alice secure a place at Ravensbourne University studying Digital Film Production! She’s now halfway through her first term and we can’t wait to see how she gets on.

Behind Her Eyes also filmed with us in Camden, Haringey, Islington and Kingston this year and is set to hit our screens and devices at some point in 2020.